"Monuments are the grappling-irons that bind one generation to another."

You'll find marvellous monuments all over the Municipality of Chester - some in tribute to those who lived greatly, some to those who died bravely, others in tribute to the tremendous spirit of a soul who lived and will always be remembered fondly.  All of them are worth seeing and appreciating for they all represent a very important part of the fabric that makes up our history and our heritage. 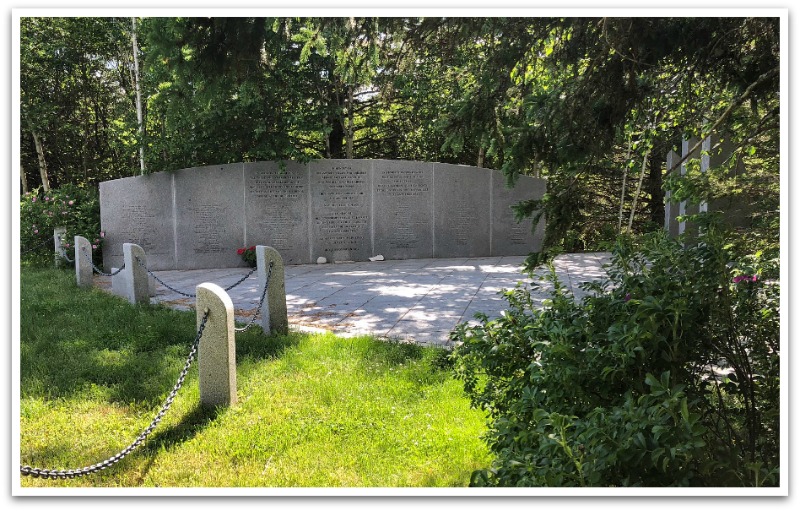 This must see monument was created in memory of all 229 people on board who perished on September 2, 1998 when Swissair Flight 111 crashed into the Atlantic Ocean southwest of Halifax Stanfield International Airport at the entrance to St. Margaret’s Bay. The crash site was 8 km / 5 mi from the shore, not far from the small fishing village of Bayswater and was a site of the recovery operation following the crash.  You'll find this right beside Bayswater Beach Provincial Park along Hwy 329 in Bayswater 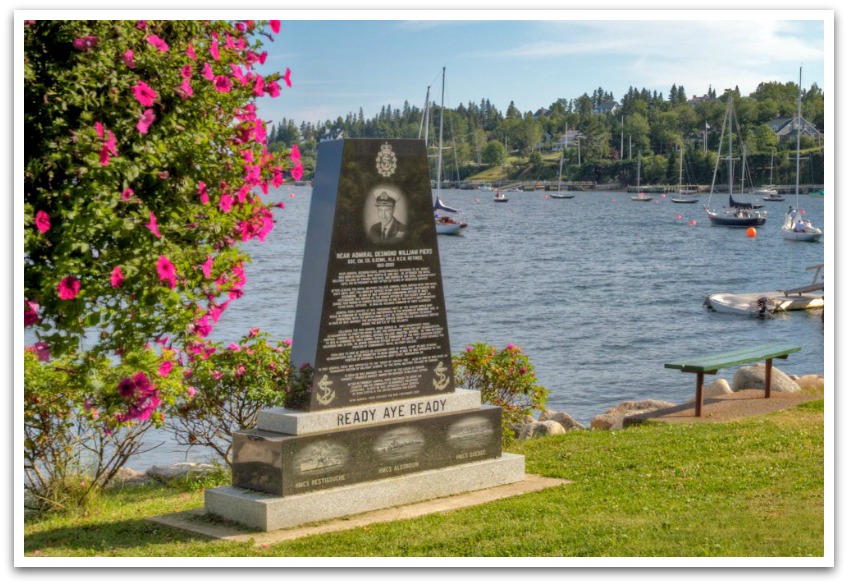 Rear Admiral Piers was a lifelong serviceman, serving in the Royal Canadian Navy from 1932 to 1967. For courageous service in the Battle of the Atlantic he received the Distinguished Service Cross. Born in Halifax on June 12, 1913 and raised in the town of Chester, he passed away on November 1, 2005 in Halifax after a distinguished navy career. His career, both in the navy and afterward, is outlined in detail on his memorial.   You'll find this monument at the corner of Queen & South Street in the Seaside Village of Chester.  For more click here. 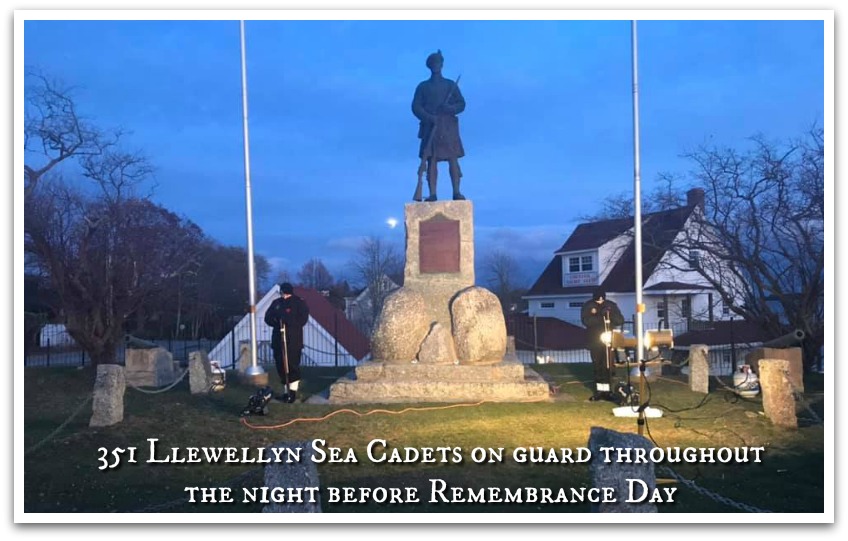 This magnificent statue of a Nova Scotia Highland soldier was unveiled on August 4, 1922. Constructed in memory of 54 men who laid down their lives from this area in World War I. The design and cast were the gift of the famous Scottish sculptor, J. Massey Rhind. The Plaque and Bronze Figure were cast in New York. The base and steps of the Monument were cut from one granite boulder by Wakefield Zinck. This monument can be found at Parade Square in the Seaside Village of Chester. For more click here 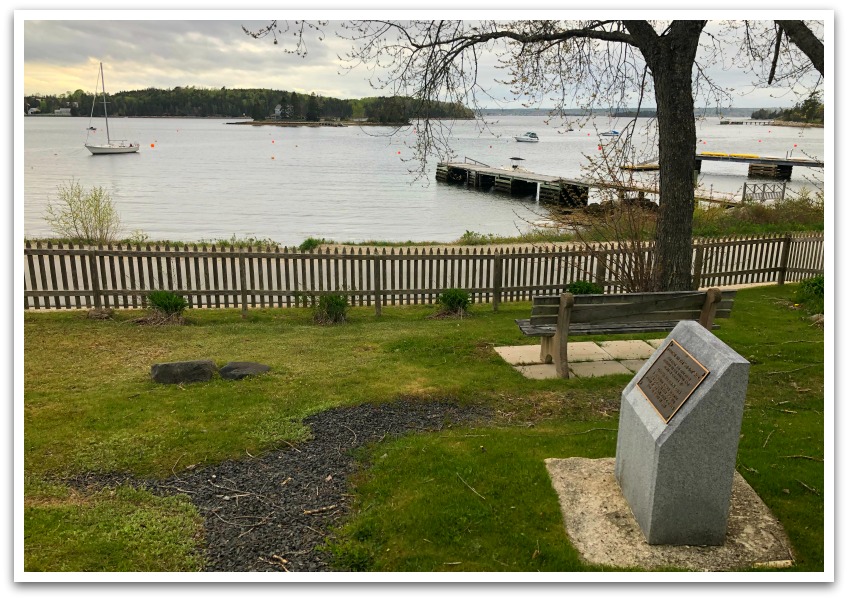 In June of 1990 the Commission, on behalf of the citizens of the Village of Chester, gratefully received a bequest from the Estate of Clarissa Anderson Gibbs. The gifts of a parcel of land and a water lot are on the Back Harbour in front of the house where Mrs. Gibbs spent her summers. Mrs. Gibbs' father, Dr. Andrew Anderson of St. Augustine, Florida, built the house you see in the photograph in 1905. It is now the permanent residence of Dr. Anderson's great-grandson. Over the years, the property came to be known as the Jib Lot because the shape of the property line is like a boat's triangular staysail, or jib. 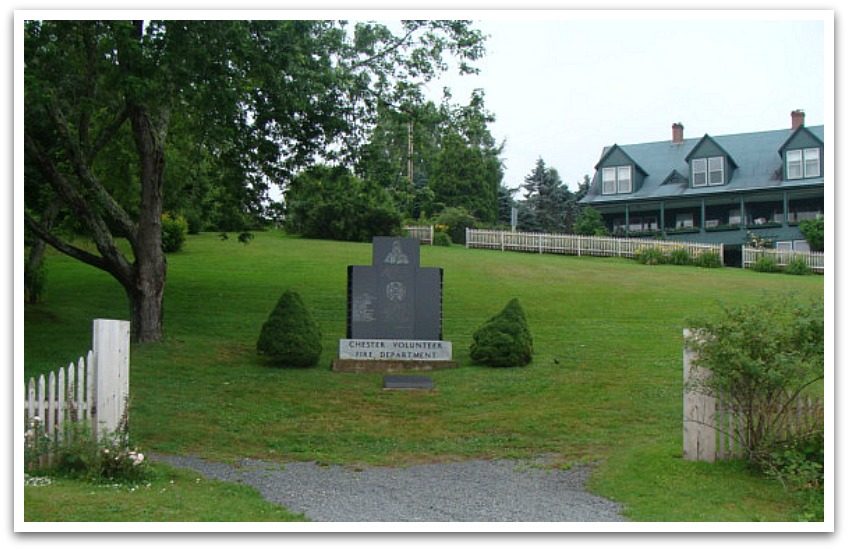 On the Victoria Street side of the Jib Lot, one will see a handsome monument erected by the Chester Volunteer Fire Department, memorializing the firefighters who have served the Village of Chester and Area well, since 1936. The monument was commissioned by the CVFD, dedicated on October 9, 1994, and is maintained by the CVFD using monies donated to the CVFD Memorial Fund.. You'll find the Jibb Lot on Victoria Street in the Seaside Village of Chester. For more information click here. 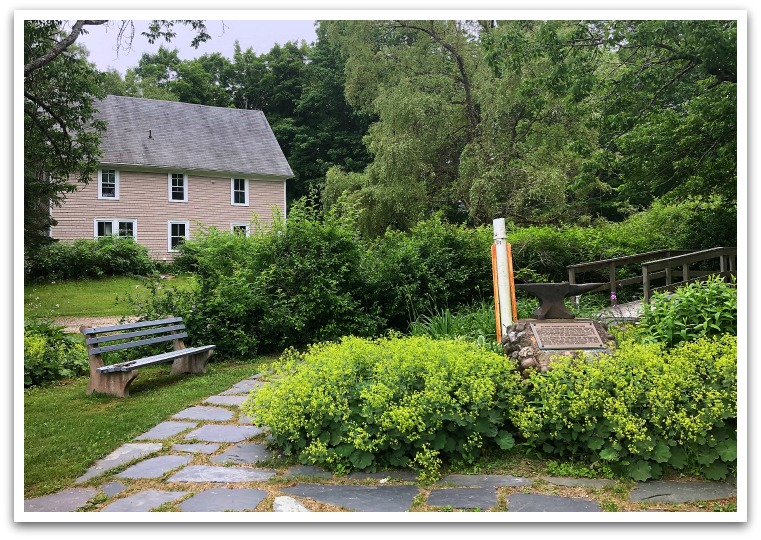 Located right along the Lighthouse Route (Hwy 3) in the heart of Chester Basin and at the bottom of Corn Hill Road you'll discover Anvil Park.  Named so after the wonderful monument to Delbert Webber's Blacksmith Shop that once stood there as early as 1864.  You can read more about Mr.Webber's work and how his Blacksmith Shop serviced so many over the years on the monuments informative plaque. While the shop was eventually torn down to make way for development his home still stands and is pictured in the background.  The Park is a great green space for sitting and listening to the brook that streams by and Anvil Park also hosts the Chester Basin Christmas Tree every holiday season. 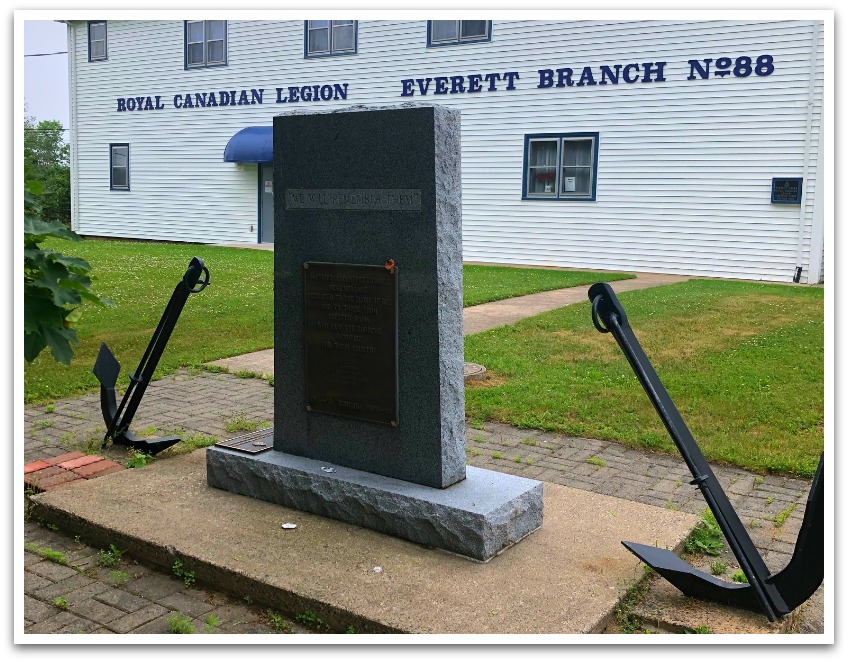 Constructed in 1976 in memory of Everett Borgald and engraved with the following "WE WILL REMEMBER THEM" In Proud and Affectionate Remembrance Dedicated to the Glory of God and to those from Chester Basin Who paid the Supreme Sacrifice. You can find this monument at the Chester Basin Royal Canadian Legion. For more information click here. 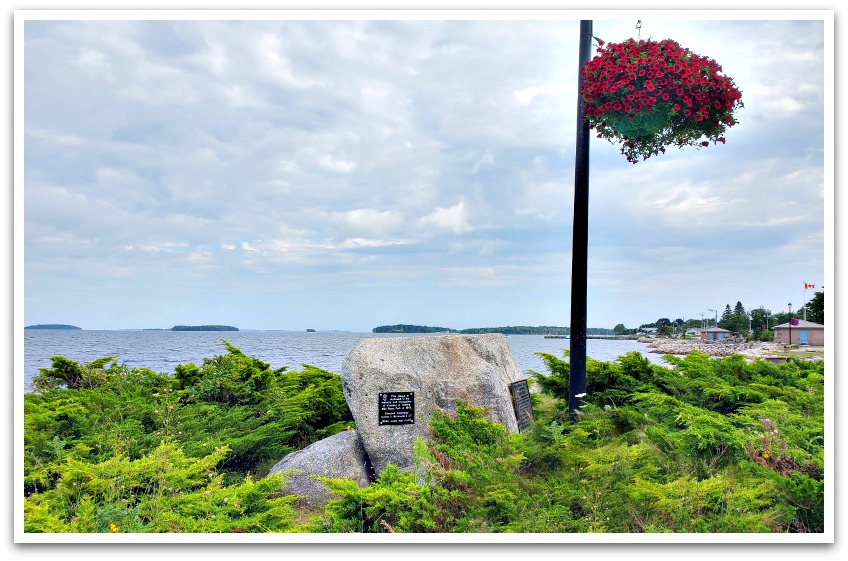 Located in the lovely community of Western Shore - you'll find Wild Rose Park right along the Lighthouse Route with stunning views of Mahone Bay. The park is a perfect spot for a picnic lunch, a dip in the water or a place to sit and watch the many boats cruise the bay in the summer. There is also a small boat launch for your kayak or canoe. Lined with wild rose bushes, at one end sits a giant rock surrounded by grenery – with one plaque to recognize the Western Shore Improvement Association and another dedicated to the memory and recognition of Vanessa Countway in naming Wild Rose Park in 1995. 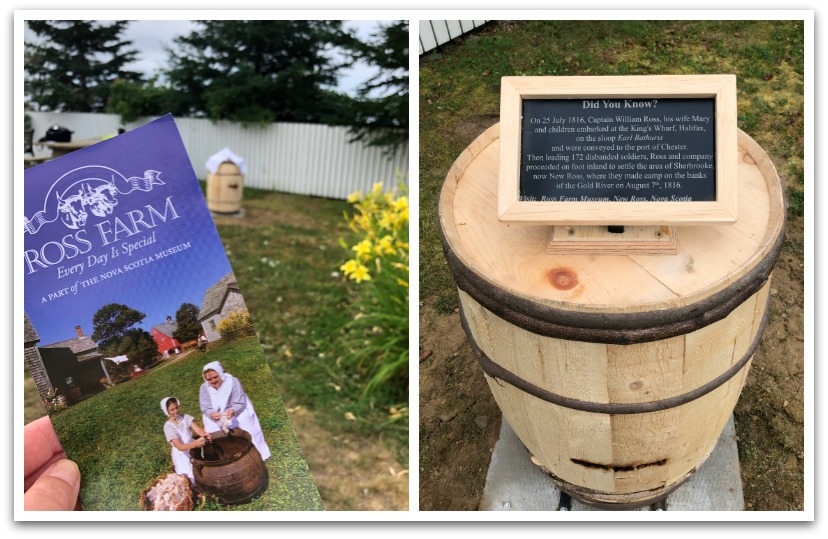 Right next to the ferry launch to Tancook in the Seaside Village of Chester you'll find the handcrafted commemorative marking the occasion of Captain William Ross, his wife Mary and their children arrival at the port of Chester, Following which Ross, his family and a company of 172 disbanded soldiers, proceeded on foot inland to settle the area of Sherbrooke, now New Ross, where they made camp on the banks of the Gold River on August 7th, 1816. For more on the history of Captain Ross and their settlement visit Ross Farm Museum. 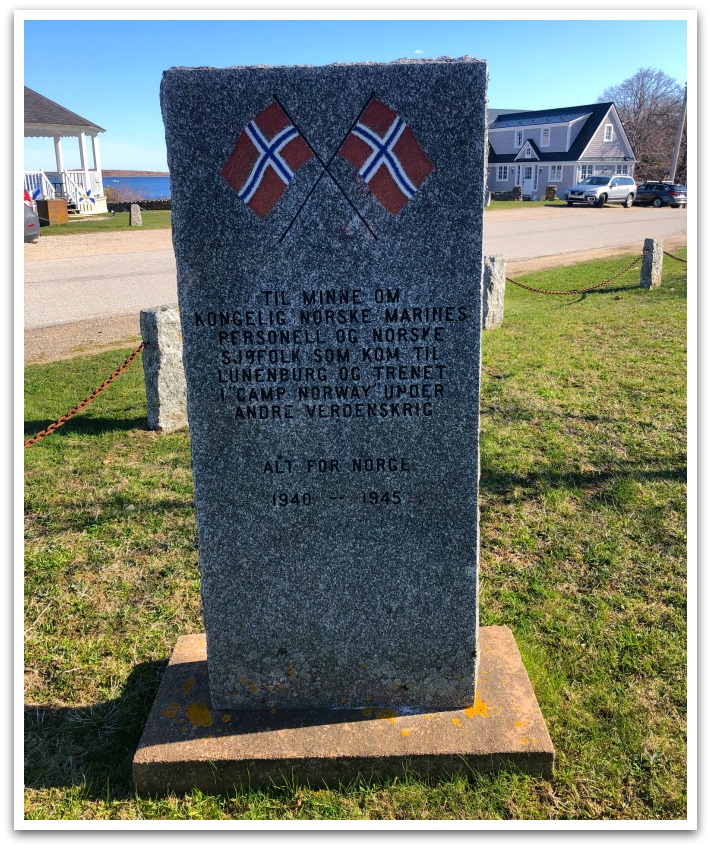 Constructed May 28, 1994 in memory of the Norwegian Royal Merchant Navy and Army who recuperated in Chester during World War II. During the Second World War members of the Royal Norwegian Navy and Merchant Navy as well as the Royal Norwegian Army, trained in Nova Scotia at camp Norway, Lunenburg, and some training camps "somewhere" on the east coast of Canada. They had their rest recuperation centres in Chester and in Liverpool they worked in ship repair. In May 1994, veterans from the Norwegian Merchant Navy, Royal Norwegian Navy and Royal Norwegian Army gathered for a full week in Nova Scotia for a Camp Norway Memorial and Reunion. While there, they unveiled several monuments to commemorate their war time stay in Nova Scotia and to thank the Village of Chester, the Town of Lunenburg and the Town of Liverpool for their hospitality and support during this period. This monument can be found at Parade Square in the Seaside Village of Chester. For more on this monument click here 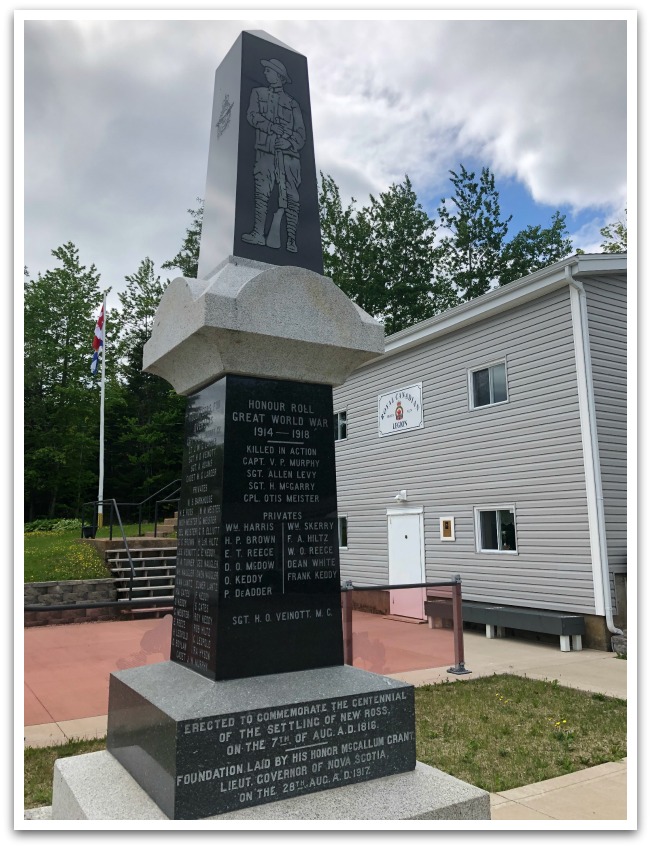 The monument is the first monument to be erected in Nova Scotia to honour those who served their country in World War One. It was erected to honour ex-soldiers who settled New Ross (then Sherbrooke) as well as those who served in World War One. Originally the base stone was placed at the village crossroads on August 28, 1917. The finished or polished stones and crown were placed on the base in the fall of 1918. In 1959, the Monument/Cenotaph was moved from its original site to its present location on the grounds of the New Ross Canadian Legion, Branch#79. You'll find this monument at the New Ross Royal Canadian Legion.  For more information click here 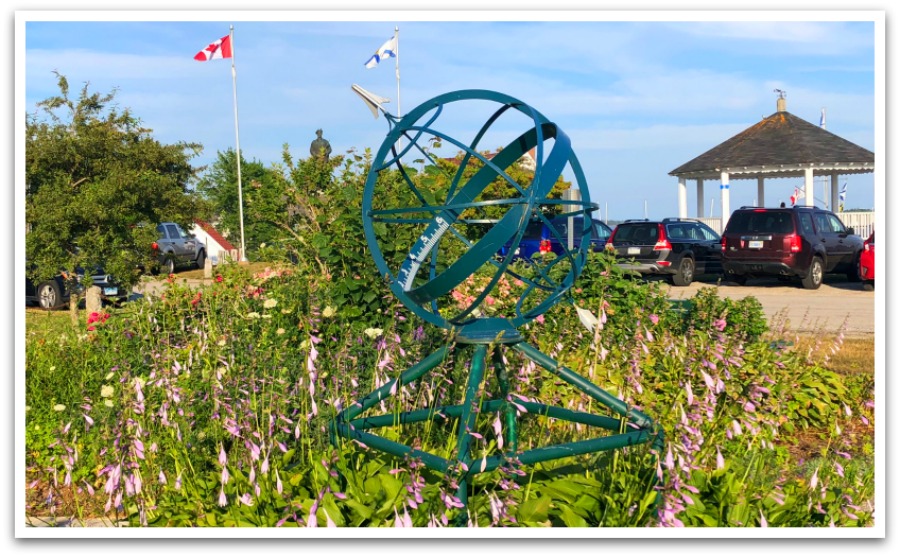 For many years, the Parade area was used as a playing field but, eventually, changes in the roadway created a new garden space separate from the memorial (Cenotaph) itself. Members of the Garden Club planted rugosa roses, shrubbery and perennials and, although the land is owned by the Municipality, the Club has continued the tradition of feeding, weeding and pruning this island bed ever since. Originally designed in the style of a Victorian garden, the garden was re-formed in 1980 based on designs drawn up by long-time Club member Ruby Pulsiver. A striking feature of the garden is the Armillary Sphere – a metal sculpture made of rings of concentric circles that indicate the relative positions of the celestial bodies. Designed by a Harvard astronomer, it was a gift to the Club by two summer residents who were members of the Club. The plaque reads GEODETIC SURVEY which is a land survey with corrections made to account for the curvature of the earth's surface. This monument can be found at Parade Square in the Seaside Village of Chester. 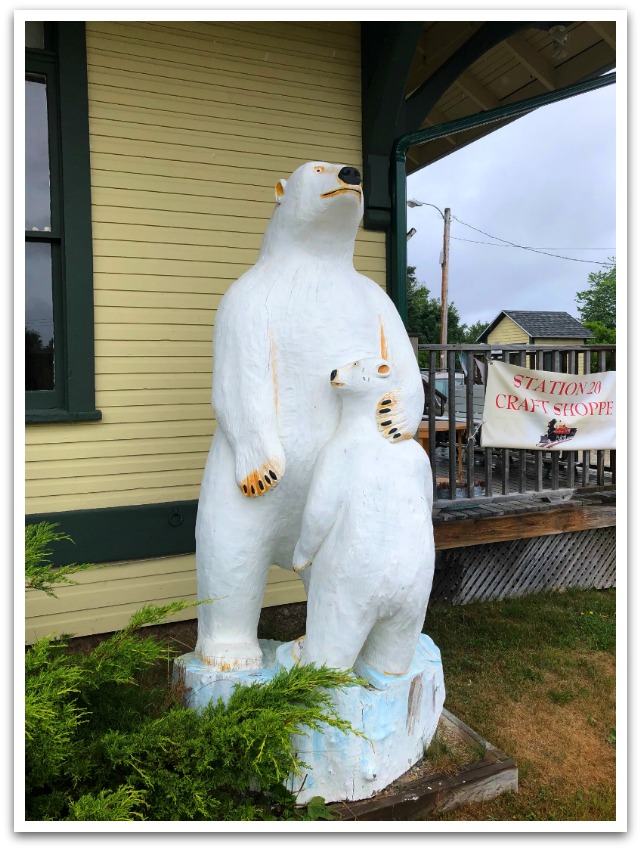 The Polar Bears at the Chester Train Station

Standing proudly for all to see - in front of the Chester's Old Train Station are the Polar Bears as carved by Chester’s own Olaf Peterson and graciously donated to the Chester Municipal Heritage Society. While there are two bears it should be noted they and the ice block on which they stand are one piece – remarkable carved from one limb of a tree from the Village of Chester’s Lordly Park! If that they were carved from one limb just imagine the how big the trunk of that great tree must have been!!! Carved off site – it was said to be extraordinarily heavy to install. Once on placed at it's current location, final painting and details were added by Mr. Peterson back in 2016.

SEA BEYOND Tree of Life 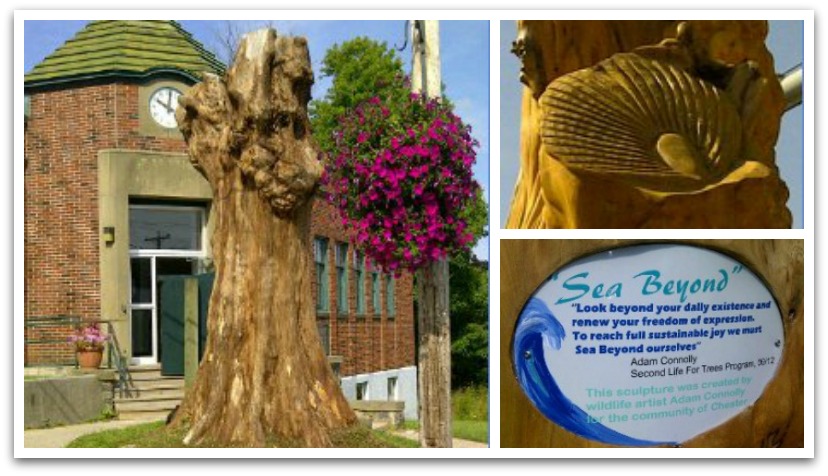 There was a big old and all but departed tree right in front of the post office  in the Seaside Village of Chester. With the deep roots firmly planted and widely spread – to have it removed would be costly and painstaking. Chester was stumped with what to do with this 'stump' until Dolly Hancock and a few other citizens suggested giving the tree a “Second Life” with the help of Dartmouth born, Big Tancook Island based wildlife sculptor Adam Connolly. After about 50 days (350 hours worth) of peeling, cutting, sawing, sanding and all other means of creating... a masterpiece now stands proudly for all to see.  For more on this beautiful creation and the sculpter behind it click here. 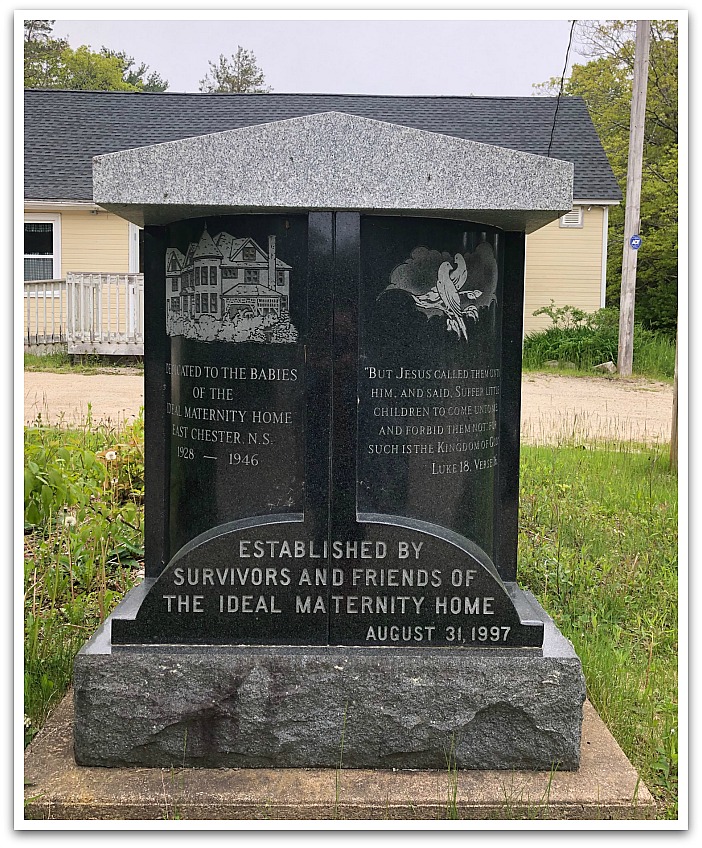 Located in front of the East Chester Recreation Association Centre (3292 Highway 3) this monument was established by the survivors and friends of the Ideal Maternity Home and dedicated to the all the babies whose lives were lost there.  A dark chapter in our history that has been documented in many books and movies including BUTTER BOX BABIES. You can read more about the Ideal Maternity Home and its survivors on their official site here.